GlasSave in action at Anglian

“Overall the glass optimisation project with Clear Thinking has paid for itself many, many times over, their support and flexibility in accommodating our wishes has been excellent“ 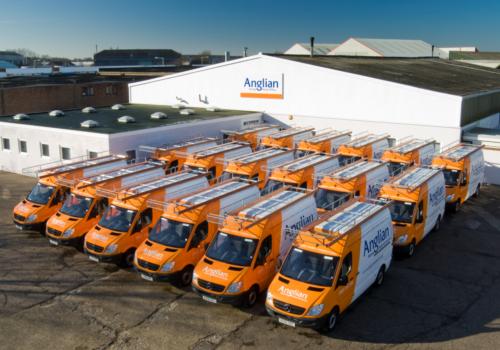 Back in 2005, Anglian Home Improvements went out to tender to replace their old glass optimisation software which was becoming obsolete at the time.  With a capacity to make 30,000 sealed units per week, this was an important investment decision for them.

They wanted to improve the yield, eliminate needless human intervention and have more control over the production process for both the glass factory planning department on a day to day basis, and the in house IT team on a strategic level, so they were free to develop the production flow in the way they wanted to . After extensive trialing of several products in the market, they chose GlasSave from Clear Thinking Software.  Since then, a project team from Clear Thinking, the glass ordering department and the Anglian glass factory planning department have been working closely together and quietly making year on year reductions in glass waste for the Anglian Group.

Philip Howard, Glass Factory Planning Manager at Anglian says, “Our old optimiser was cumbersome, labour intensive to operate and had become unsupported and the original vendor was pressurising us to upgrade to their new version, which was not taking us in the direction we wanted to go, as it still required a person to manage it on a daily basis.”

“Clear Thinking have provided a totally integrated ‘automatic’ system with our in house IT team – we send orders to GlasSave and it then optimises them as well as it can. If it doesn’t have enough work to fill a whole sheet and there are remnant sub plates or part sheets unused, it tells us this and we automatically keep topping it up with more work until we have achieved a good yield. This has meant that we now never have to handle any off-cuts of any 6x3m jumbo sheets and this in turn has speeded up production and the efficiency of both the cutting, handling and downstream unit assembly operations considerably and helped keep the factory a safer environment.”

“This system also helps us by automatically inserting any remakes back into the system without the need to stop what we’re doing, so an urgently needed piece can be inserted into the current batch, and cut at high yield without intervention from the operator. Whereas the old method was to either use an off-cut with all the attendant problems of handling and storage and low yield or we would have to wait and accumulate off-cuts together at the end of the day. This new method is both quicker – so we get the remake sooner – and more efficient, in that it’s cut within the normal processing, so it is mixed in with our other jobs to reduce wastage”.

Shape nesting is an integrated part of the system – these shapes can come from many sources, they could be simple, regular geometric shapes from the window fabrication software, they could be more irregular shapes for conservatory roofs, or even random one off DXF CAD shapes that need to be cut for bespoke frames – these are generated by a camera based system on site which in turn sends an accurate DXF shape to the optimiser, which then deduces which sides might need trims, dependant on the orientation of the shape and will then nest any shape with any other shapes to achieve the best yield it can.

Another important criteria for Anglian was to eliminate the time that human operators had needed to be involved with the process in the past, so the system is now fully automated. The system is completely controlled by the priority of work allocated by the glass factory planning department, so that units will be scheduled to meet the frames on time, so work-in-progress is kept to a minimum to keep costs down, but also we can rely on everything being in the right place at the right time for the glass and frames to be despatched. 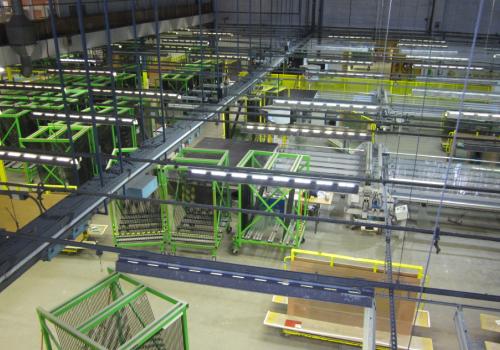 Inside Anglian’s factory (above) – the system is set up so that units will be scheduled to meet the frames on time, to keep work in progress to a minimum

Part of Anglian’s consideration was to build in redundancy of computer hardware into the project, so the system is running on virtual PCs running on a server for resiliency, in case a PC fails. So if one PC fails, then they can still operate the factory with either one of the remaining two optimisers. In fact the whole factory could work on a single optimiser because it is so quick. “If we can ensure that we keep the factory running efficiently for the cost of a couple of backup PC’s, we thought the investment was well worth it,” adds Philip.

“Overall the glass optimisation project with Clear Thinking has paid for itself many, many times over, their support and flexibility in accommodating our wishes has been excellent,” says James Wilson – Manufacturing Director. “We have made a huge reduction to our glass wastage over the last few years, and because the system is automatic, we have been able to save labour costs, both in the office where we’ve redeployed people to other roles within the business and on the shop-floor where cutting, handling, stacking labour savings have also been very significant, and factory throughput has increased.”